Livy is our original source for the Lucretia story.  Ovid follows him but embellishes with lush detail which tends to emphasise Lucretia’s victimhood.   This allows for lots of erotic sensuality and emotional drama which is the sort of thing Ovid likes.  It is not the sort of thing Livy likes, but more than this, Livy is writing the story of Rome.  Lucretia is a founding mother, commemorated as a female role model and political heroine.  In a period of decadence, when the men fail to resist a vicious autocracy, Lucretia’s defence of the values of the home recalls them to their duty.  The result is the institution of the finest form of government known to Livy, the Roman Republic. 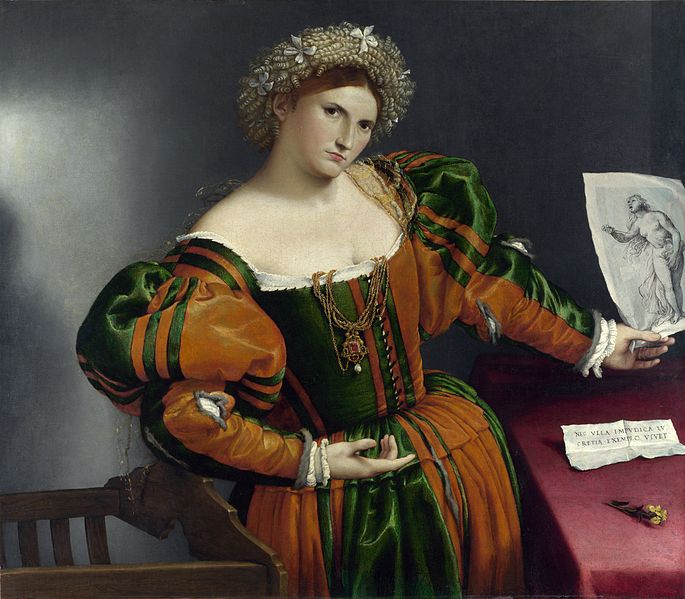 Livy’s Lucretia sends for her men.  When they arrive she is weeping, but full of purpose.  She tells her story very briefly.  She states that only her body is violated, not her mind and she demands that the men swear vengeance.  She dictates the terms; she will kill herself, they will kill him – if they are men.  The men then try to persuade her not to commit suicide.  She tells them to mind their own business – their job is to deal with Sextus.  We do not yet find out, but she is already carrying the dagger she will use – whatever the men say.  She has resolved to die to preserve her honour – so that no woman shall live unchastely using Lucretia as an excuse (nec ulla deinde inpudica Lucretiae exemplo vivet).

This is really not what modern readers expect to hear Lucretia say.  When I teach this text, I can’t stop students telling me that Lucretia is forced to kill herself by the rules of the patriarchy.  Because she has been raped, she must die to save her men shame.  Or she is so traumatised by the rape that she kills herself through misery and despair. These are assumptions people bring to the text, maybe because of Ovid and all those naked Lucretias in art galleries.  But what Livy says is very different.  It is Lucretia who does  the enforcing.  She chooses to reveal the rape, to do it in Roman fashion, before male witnesses, to assert her intention to die, and to demand an oath of vengeance from the men.  Then she defies them and stabs herself unexpectedly.  After her suicide, the men will be publicly dishonoured if they don’t exact vengeance. Thus Lucretia causes the fall of the Tarquins and the end of Roman monarchy.  She becomes a model for all women and the foundress of the Roman Republic.

So what is happening here?  Rape doesn’t exist as a concept for Lucretia.  Her exchange with the men indicates that she is thinking in terms of adultery.  All participants in the exchange seem to assume that an adulteress is punishable by death.  In the early days of Rome the paterfamilias had rights of life and death over his children, and a husband was allowed to kill a wife taken in adultery.  It seems to be this sort of life-taking within the family that we are talking about – nothing to do with the actual laws of Classical Rome.  Lucretia and the men agree that she had no guilty intent, and therefore should not suffer even.  Instead, Sextus, the perpetrator, will be made to suffer.  They are formulating principles for dealing with rape which are quite enlightened for the period.   Lucretia has satisfied her menfolk that she is not an adulteress; she can now leave it to them to take over and deal with the rapist.

Lucretia is resistant.  She rejects the option of return into the private realm which the men offer.  What she does next is not to do with distress, despair or coercion, but entirely to do with honour – her female honour.  Romans were collective thinkers.  For Romans, suicide in the face of dishonour was an act of personal success, not failure, because it preserved unity with the values of the community and the ancestors and left the suicide the same legacy of honour as those who died preserving those values on the  field of battle.  Having been dragged into public realm, Lucretia resolves to reclaim her honour from any taint of suspicion as a man might do, and earning a glory usually reserved for men.  She stabs herself with a male weapon  (female suicides often hang themselves with their girdles) and it is the men who raise the lamentation.

Lucretia’s motivation is completely bound up with Roman collectivity.  She has lived as the perfect wife not because she is dominated by the patriarchy but because she is a strong soul dedicated to the values of the community.  She has no sympathy with women who flout those values.  She will not have her name which is also her family name associated with the ‘Lucretia defence.’  Her suicide is not an act of self-obliteration, but of transcendence, which asserts her own identity, not with her body, but with the values of her family and community and the spirits of the ancestors.  Lucretia does not just clear her family name, she adorns it and creates an inheritance for her children, an unfailing memory for herself – she fulfils the ideal of Roman life, as much as if she fell on the field of battle.  Her suicide shames the men, booting the Roman aristocracy into getting rid of the corrupt and repressive system of kingship, making her, for Livy, a genuine foundress of the Republic.  What more could a woman want?

Way to go Lucretia, early feminist!  Or not.  This is always the paradox with feminism.  Are you a feminist because you are a strong empowered woman living by your own rules, or are you a feminist because you sign up to a charter of women’s rights, including things like compassionate treatment for rape victims?  I often meet feminist men telling me what, as a woman, I have to think about women’s rights – and this gets me into awful trouble.  Me and Lucretia both, because she is an empowered self-determining woman who grasps the prize of honour like a man.  But, meanwhile, she derails the cause of women for a the best part of two thousand years.  In practice, Romans did not demand that raped women kill themselves, but this remained the gold standard of female behaviour.   The Church ban on suicide, when it eventually came, did nothing to remove the stigma, which continued to degrade raped women right up until – oh wait, has that not stopped yet?

EPILOGUE ON RAPE AND HONOUR SUICIDE IN THE ROMAN TRADITION

Livy was writing in the 1st Century BC as Augustus tightened moral legislation to try to restore the ancient virtues of the Roman home.  Augustan ideology held that the Roman state had been strongest when it had been supported by the bravery and self-sacrifice of its warriors and the militant chastity of its strong homesteading women.  Augustus tried to enforce marriage and childbearing, and increased penalties for female adultery, but he could not maintain traditional morals even in his own family.  Nonetheless, interest in these ancient role models was rekindled, which is why our earliest versions of the Lucretia story (Livy and Ovid) date from the era.

Honour suicide continued to be esteemed at Rome as a response to rape to such an extent that it nearly got incorporated into Christian theology.  the crucial moment came in the 4th Century BC when Bishop Ambrose of Milan, a man of aristocratic background wrote to his sister, Marcellina, who, with her mother, had formed an early community of dedicated virgins, nuns, in Rome.  The Letter to Marcellina is here.  In this letter, Ambrose recognises the act of suicide to avoid rape as an act of Christian martyrdom, citing the instance of a fifteen year-old girl, Pelagia, who had encouraged her mother and sisters to drown themselves to avoid rape by marauders.  Ambrose recognised Pelagia as a saint.

So why didn’t the Church add honour suicide to its long list of female duties?  For that, we have to thank St Augustine of Hippo.  He retold the story of Lucretia in his City of God  I. 19, but with disapproval.  If a woman is raped in all innocence, then to kill her, is to kill an innocent.  If she kills herself, she becomes a murderess.  Perhaps, says Augustine darkly, Lucretia had secretly enjoyed the rape after all, and knew she did really deserve to die.  Augustine’s barn-storming denunciation put an end to honour suicide as an act of female martyrdom.   His thinking is not entirely sympathetic today;  he suggests, for example, that women should consider whether they have been permitted to be raped as punishment for their excessive pride in their chastity.

Nonetheless, I give you Augustine, feminist theologian.

I am a graduate in Classics of St John's College Cambridge. I live with my family in a 3 bedroom library in Oxford. Chronic illness and the needs of my family set my course long ago on the strange Odyssean voyage of part time academic short contracts. The purpose of this blog is not to chart safe havens and reefs I have encountered on the way, but to share some of the stuff I have picked up on the beach. View all posts by livinginmylibrary